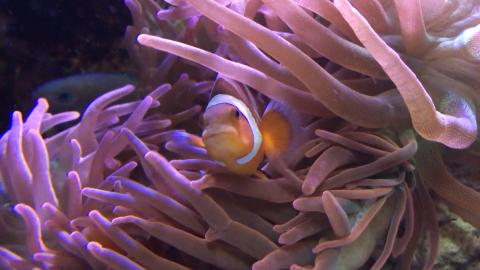 Nemo, the adorable clownfish in the movie Finding Nemo, rubs himself all over the anemone he lives in to keep it from stinging and eating him like it does most fish. That rubbing leads the makeup of microbes covering the clownfish to change, according to a new study.

Having bacterial cooties in common with anemones may help the clownfish cozily nest in anemones’ venomous tentacles, a weird symbiosis that life scientists - including now a team from the Georgia Institute of Technology - have tried for decades to figure out. The marine researchers studied how populations of microbes shifted on clownfish who mixed and mingled with fish-killing anemones.

“It’s the iconic mutualism between a host and a partner, and we knew that microbes are on every surface of each animal,” said Frank Stewart, an associate professor in Georgia Tech’s School of Biological Sciences. “In this particular mutualism, these surfaces are covered with stuff that microbes love to eat: mucus.”

“Their microbiome changed,” said Zoe Pratte, a postdoctoral researcher in Stewart’s lab and first author of the new study. “Two bacteria that we tracked in particular multiplied with contact with anemones.”

“On top of that, there were sweeping changes,” said Stewart, the study’s principal investigator. “If you looked at the total assemblages of microbes, they looked quite different on a clownfish that was hosted by an anemone and on one that was not.”

The researchers chased 12 clownfish in six fish tanks for eight weeks to swab their mucus and identify microbes through gene sequencing. They published their results in the journal Coral Reefs. The research was funded by the Simons Foundation.

Here are some questions and answers about the experiment, which produced some amusing anecdotes, along with fascinating facts about anemones and clownfish. For example, fish peeing on anemones makes the latter stronger. Clownfish change genders. And it was especially hard to catch one fish the researchers named “Houdini.”

Does this solve the mystery about this strange symbiosis?

No, but it’s a new approach to the clownfish-anemone conundrum.

“It’s a first step that’s asking the question, ‘Is there part of the microbial relationship that changes?’” Stewart said. The study delivered the answer on the clownfish side, which was “yes.”

An earlier hypothesis on the conundrum held that clownfish mucus was too thick to sting through. Current ideas consider that mucus swapping also covers the clownfish with anemone antigens, i.e. its own immune proteins, or that fish and fish killer may be exchanging chemical messages.

“The anemone may recognize some chemical on the clownfish that keeps it from stinging,” Stewart said. “And that could involve microbes. Microbes are great chemists.”

Going forward, the researchers want to analyze mucus chemistry. They also don’t yet know to what extent the microbes on the fish change because of bacteria the fish gleans from the anemone. It’s possible the fish mucus microbiome just develops differently on the fish due to the contact.

What do anemones normally do to fish?

Kill them and eat them.

“The anemone evolved to kill fish. It shoots little poison darts into the skin of a fish to kill it then pull it into its mouth,” Stewart said. “The clownfish gets away with living right in that.”

By the way, the tentacles are not harmful to people.

“If you touch an anemone, it feels like they’re sucking on your finger,” Pratte said. “Their little harpoons feel like they’re sticking to you. It doesn’t hurt.”

What do the anemones and clownfish get out of the relationship?

For starters, they protect each other from potential prey. But there’s lots more. Some clownfish even change genders by living in an anemone.

“When they start being hosted, the fish make a big developmental switch,” Stewart said. “The first fish in a group that establishes itself in an anemone in the wild transitions from male to female, grows much bigger and becomes the dominant member of the group.”

She is then the sole female in a school of smaller male mates.

Anemones appear to grow larger and healthier, partly because the clownfish urinate on them.

“When the fish pee, algae in the anemone take up the nitrogen then secrete sugars that feed the anemone and make it grow,” Pratte said. “Sometimes the fish drop their food, and it falls into the anemone which eats it.”

Any fun anecdotes from this experiment?

Plenty: It was scientifically straightforward but laborious to carry out, partly because the researchers were taking meticulous care of the fish at the same time.

“You have to get fish and anemones to pair up, and the fish can host in other places, like nooks in the rock,” Pratte said.

“Clownfish are smarter than other fish, so they’re harder to catch, especially when we want to minimize stress on the animals,” said Alicia Caughman, an undergraduate research assistant in the School of Biological Science’s Fast Track to Research program. “We named one fish ‘Houdini.’ He could wiggle between nets and tight spaces and usually outsmart whoever was trying to catch him."

“We also had 'Bubbles,' who blew a lot of bubbles, 'Biggie' and 'Smalls,' 'Broad,' 'Sheila,' 'Earl,' and 'Flounder,' who liked to flounder (flop around),” Pratte said. Clownfish have differing sizes and details in their stripes, which allow people to tell them apart.

The anemone side of the microbial question may prove harder to answer because for all Houdini's wiles, anemones, which are squishy non-vertebrates, are even more trying. They can squeeze into uncomfortable niches or plug up the aquarium drainage, and they also have temperamental microbiomes.

The following researchers coauthored the paper: Nastassia V. Patin, Mary E. McWhirt and Darren J. Parris, all of Georgia Tech. DOI: 10.1007/s00338-018-01750-z. The research was funded by the Simons Foundation (award 346253). Any findings, opinions or recommendations are those of the authors and not necessarily of the Simons Foundation. 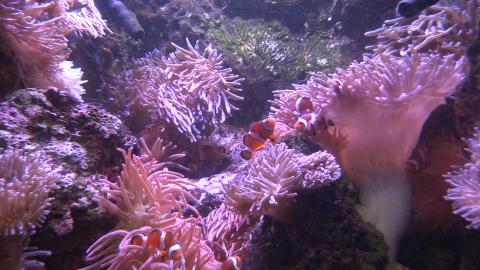 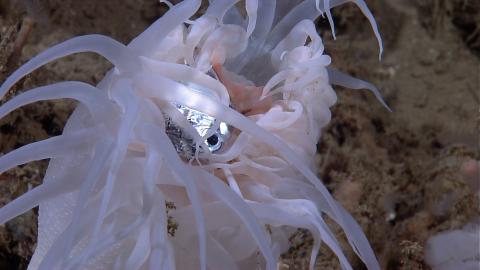 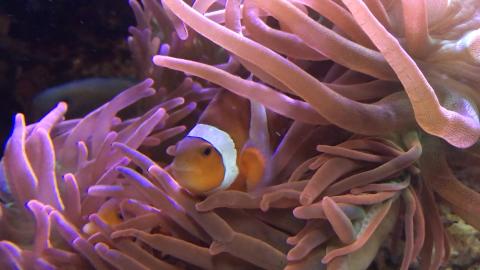 Earth and Environment
Science and Technology