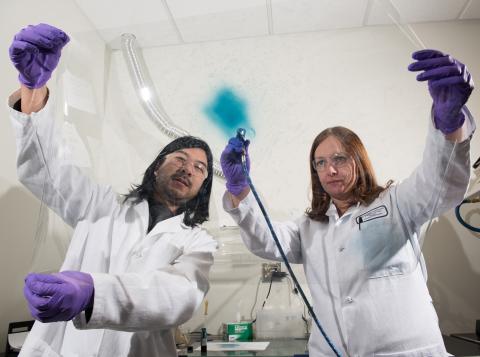 Artists, print designers and interior decorators have long had access to a broad palette of paint and ink colors for their work. Now, researchers have created a broad color palette of electrochromic polymers, materials that can be used for sunglasses, window tinting and other applications that rely on electrical current to produce color changes.

By developing electrochromic polymer materials in a range of primary and secondary colors and combining them in specific blends, the researchers have covered the color spectrum – even creating four shades of brown, a particularly difficult color combination. The materials could be used to make sunglasses that change from tinted to clear in a matter of seconds, at the press of a button. Other uses could include window tinting, signage and even greeting cards that change color through the application of low-voltage electrical current.

Supported by BASF, the research is reported in the journal ACS Applied Materials & Interfaces. The research was done in the laboratory of John Reynolds, a professor in the School of Chemistry and Biochemisty and the School of Materials Science and Engineering at the Georgia Institute of Technology.

“We’ve demonstrated the ability to create virtually any color we want by mixing different electrochromic polymers, just like mixing paint,” said Anna Österholm, a research scientist in Georgia Tech’s School of Chemistry and Biochemistry and the paper’s first author. “Using a simple coating method or even inkjet printing, we can create films that change color with the application of a voltage.”

The many colors that have been developed by Reynolds’ group over the years include magenta, cyan, yellow, orange, blue and green polymers that can be dissolved in common solvents. In addition, blends of these polymer solutions can be predictably mixed to target specific colors.

To demonstrate the capabilities, the researchers created brown lenses for sunglasses using a five-layer sandwich of materials, including a film of the electrochromic material, a charge storage layer and a UV-curable electrolyte, with a cathode and anode layer on either side.

The lenses can be switched between a colored and colorless state by applying a brief pulse of electrical current and do not need a continuous power supply. To maintain the colorless state, a brief refresh pulse needs to be applied approximately every 30 minutes; however, the colored state can be stable for up to several days. The materials can switch from about 10 percent transmittance to 70 percent transmittance – and back – in a few seconds.

The brown shades are created by combining cyan and yellow primary colors with orange and periwinkle-blue secondary colors.

Photochromic sunglasses, which darken in response to light using a silver halide reaction, are already on the market. But many of these lenses respond to ultraviolet wavelengths that are filtered out by automobile windshields, require several minutes to transition – and can’t be controlled by users. The passive switching time can be problematic for pilots, drivers, security officers or others who move quickly between light and dark environments.

“In contrast, by using electrochromic polymers, we can create devices that by pushing a button, can be converted from dark to clear,” said Österholm. “They are completely user-controlled, and it doesn’t matter whether they are being used indoors or outdoors, in a vehicle or an aircraft.”

The electrochromic materials rely on a reduction-oxidation (redox) reaction triggered by the application of an electrical potential provided by a simple coin battery: a positive one volt causes the glasses to be clear, while a minus one volt switches to the color. “Essentially, we are just charging and discharging the device, which is what causes the color change,” explained Eric Shen, a postdoctoral fellow in the Georgia Tech School of Chemistry and Biochemistry.

The electrochromic materials represent years of work by the Reynolds Laboratory to synthesize polymers whose repeat-unit structures provide the desired palette of colors. Because they can be dissolved in the same solvents, additional colors can be created by combining specific quantities of the primary and secondary colors.

“Anything that you would want to have change color at the push of a button would be an application for these,” said Shen. “We have shown that we can switch them on and off thousands of times, and that we can shine strong light on them without causing degradation of the color.”

The researchers have used simple spray and blade-coating techniques to create films of the colorful materials. They now are using ink-jet printing to create patterns and mix the polymers to create colors.

“The ink-jetting is very versatile when you want to make patterns or very fine features with these materials,” Shen said. “The fact that the polymers are so soluble makes it quite easy to process them using anything that would spread an ink.”

In addition to the researchers already mentioned, the paper’s co-authors include Justin Kerszulis and Rayford Bulloch from Georgia Tech, Michael Kuepfert from BASF in Tarrytown, New York; and Aubrey Dyer from Clayton State University in Morrow, Georgia. 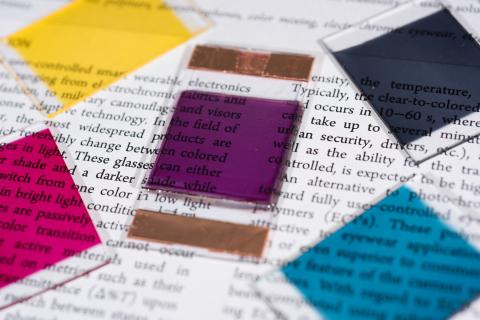 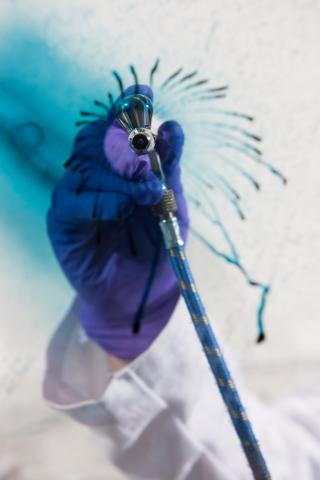 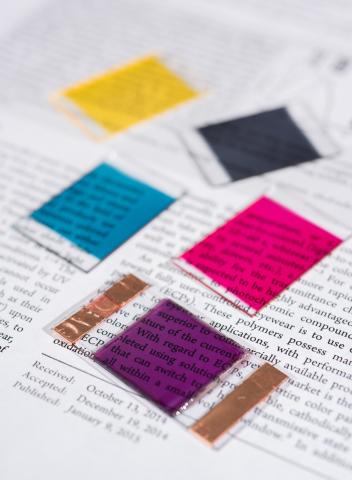 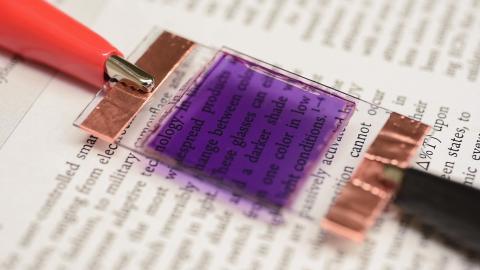