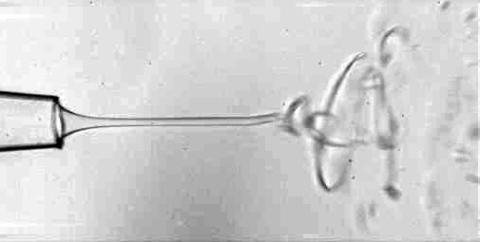 Industrial wet spinning processes produce fibers from polymers and other materials by using tiny needles to eject continuous jets of liquid precursors. The electrically charged liquids ejected from the needles normally exhibit a chaotic “whipping” structure as they enter a secondary liquid that surrounds the microscopic jets.

But the liquid jets sometimes form a helical wave. And that was intriguing to Alberto Fernandez-Nieves, an associate professor in the School of Physics at the Georgia Institute of Technology.

By controlling the viscosity and speed of the secondary liquid surrounding the jets, a research team led by Fernandez-Nieves has now figured out how to convert the standard chaotic waveform to the stable helical form. Based on theoretical modeling and experiments using a microfluidic device, the findings could help improve industrial processes that are used for fiber formation and electrospray.

The research, conducted in collaboration with the University of Seville in Spain, was supported by the National Science Foundation (NSF). It was reported Sept. 8, 2014, in the early online edition of the journal Proceedings of the National Academy of Sciences (PNAS).

“We are developing an understanding of the basic coupling between hydrodynamic and electric fields in these systems,” said Fernandez-Nieves. “The issue we examined is fundamental physics, but it could potentially lead to something more interesting in fiber generation through electro-spinning.”

In conventional industrial processes, tiny metal needles apply an electric field as they eject the polymer-containing solution. In the laboratory, the researchers used a glass-based microfluidic device to create the jets so they could more closely examine what was happening. Using a conductive liquid, ethylene glycol, allowed them to apply an electrical field to produce electrified jets.

“When you charge these polymer solutions, the jets themselves move out of axis, which creates a chaotic phenomenon known as whipping,” Fernandez-Nieves explained. “This off-axis movement causes the jet to abruptly move in all directions, and in the industrial world, all that motion seems to be beneficial from the standpoint of making thinner fibers.”

While producing a whipped jet in a viscous dielectric material – polydimethylsiloxane oil – the researchers were surprised to see the chaotic motion switch over to a steady-state helical structure.

Georgia Tech postdoctoral fellow Josefa Guerrero used a high-speed, microscope-based video camera operating at 50,000 frames per second to study the waveforms emerging from the experimental jets, which were less than five microns in diameter. The video allowed precise examination of the waveforms produced when the liquid flowed out of the glass needle and into the second liquid flowing around it.

“By developing the model, we were able to balance the importance of the different forces in the experiment,” explained Fernandez-Nieves. “The helix was part of the solutions in the model and it reproduced some aspects of the experimentally observed helices.”

Once the jets were stabilized by the viscous secondary liquid, the properties of the helix were controlled by the electrical charge. In the experiment, the researchers applied approximately 1,000 volts to generate the jets.

“We learned that the outer fluid plays a major role in stabilizing the structure of the jets,” Fernandez-Nieves added. “Once the structure is stable, the details of the properties of the helical structure depend on the charge.”

Ultimately, the stable jets break up into spherical droplets. The researchers have not yet formed fibers with their experimental setup.

In future work, Fernandez-Nieves hopes to study other waveforms that may be produced by the system, and evaluate how controlling the liquid jets could improve industrial techniques used in fiber production and electrospray processes that generate clouds of droplets.

“We are interested in trying to map out those different behaviors,” he said. “For us as physicists, this is interesting because it allows us to explore, address and measure things that nobody could look at before in the way we can today. We are anxious to understand the applied impact.” 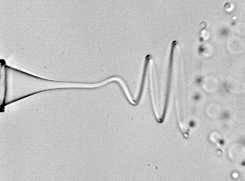